The Demise of Lowe Hall: Part 1 – Langtons and Pughs


[Note – much of the information that follows was obtained from Salford City Archives – The Bridgewater Estates Collection, documents BW/T/2/ 1, 2, 3, 4. This Archive is now closed indefinitely]>/p>


Dates are given “Old Style” where appropriate. 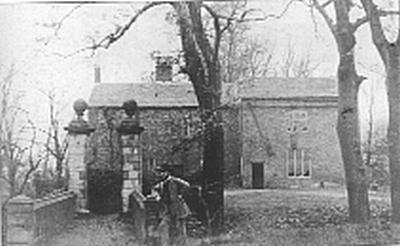 This one poor-quality photograph of Lowe Hall is the only that appears to have survived.


Lowe Hall, Hindley, Lancashire was the ancestral home of the Langton family, which by the middle 1600’s was in the hands of Abraham Langton. The Lowe Estate was not small and is described in 1653 as “the manor of Hindley with the Appurtenances and 70 Messuages, One Dove House, One Water Corn Mill, 50 Orchards, 60 Gardens, 500 Acres of Land, 100 Acres of Meadows, 600 Acres of Pasture, 20 Acres of Woods, 300 Acres of Heath and Ling, 400 Acres of Turbury, 200 Acres of Moss and Eighty Shillings of free Rent with the Appurtenances in Hindley and Westleigh.” and a “Capital Messuage called the Low within the said manor”. The Langton family were staunch Catholics and 1653 was the year in which Abraham regained their lands, having had them confiscated in 1652 as a “papist delinquent”. It is of interest though that as early as 1641 it is estimated that 2/3 of Abraham Langton’s income was from coal (The Chetham Society XXV – Third Series “The Lancashire Gentry & the Great Rebellion 1640 – 1660).


Of Abraham’s children, it is his eldest son and heir Philip Langton (born 1628) who is key to the future history of the family. On 3 Dec 1655 Philip married Elizabeth Pennant in Wigan All Saints. Elizabeth was the daughter of Edward Pennant, the Pennants being a notable Welsh family seated at Bagillt, Holywell, Flint. In 1664, Dugdale’s Visitation of Lancashire, under “The Langtons of Lowe” (The Chetham Society Old Series Vol LXXXV) shows Philip as having four children: Robert aged 7 (i.e. born 1657), Philip, George and Elizabeth. In the style of Dugdale these children are listed in order of succession – the three sons in order, then his daughter, even though Elizabeth was probably older than some of her brothers. No dates or other details are given other than for Robert. Absent from this list is his youngest son Edward who must have been born after 1664.


Abraham Langton was buried in Wigan All Saints 9 Feb 1675.


It is Edward though who is to figure most prominently in what follows. Around Feb 1686 – the date of his marriage settlement - Edward married Catherine Giffard (or Gifford), daughter of John Giffard Esq. The marriage settlement starts “By Indenture of Lease and Release being made between the said Philip Langton and the said Elizabeth his then Wife of the first part Edward Langton Gent his Son and Heir Apparent and Catherine his wife of the second part…..” and goes on to mention “Remainder to George Langton second son of the said Philip Langton for ever.”


There is clearly something odd going on here. Firstly Edward, the youngest son, is already being declared “his heir apparent” even though he was probably only about 21 at the time if he had been born in 1665 (i.e. after Dugdale) and had elder brothers. Also George is now referred to as “second son” whereas in Dugdale he was the third son behind Robert and Philip. Part of the answer could lie in that a “Philip, son of Philip Langhton of Ince” was buried in Wigan All Saints on 18 Feb 1661. As Ince is immediately adjacent to Hindley this is not a problem, but the date of his death pre-dates Dugdale. As no dates at all are give for Philip this may just have been an oversight on the part of Abraham who submitted the pedigree. No other reference to Philip has been found.


If Philip had gone, the question remains – where was Robert? Although there is no mention of him at Lowe Hall, the indications are (yet unproven) that he is the same Robert LEIGHTON of Marple from whom the majority of Langtons in Lancashire and Cheshire descend (see my previous article for the Lost Langtons website – What's in a name?). If so there must have been some rift in the family for him to be cut out of the Lowe Hall inheritance. The most likely reason was religion – Philip and Edward were loyal to the Catholics faith, to the extent that a Priest, Dom John Placid Acton, was chaplain to the Langtons at Lowe Hall, where he died Nov. 25, and was buried at Wigan Nov. 28, 1727 (Catholic Record Society Vol. 23, 1922). Yet the descendents of Robert in Marple all appear to be protestant Remember that in “The Glorious Revolution” of 1688 the Catholic King James II was ousted in favour of the Protestant William & Mary. Maybe Robert went with the times, thereby putting him out of joint with his father and brothers. The connection with is discussed further in Part 2 of this article.


Philip, however, continued to uphold the Catholic cause. On, 9 January 1688 Thomas Greenhalgh wrote to Roger Kenyon, at Peel: "There was 2 men this day with me, the one lives in Bolton, the other on Tonge Moor, that were but a few days since at the ale-house on Hindley Common, when Mr. Langton of Lowe being gone out to look on the wall, the landlord begun the Earl of Derby's health, which Mr. Langton hearing, broke the landlord's head with his cane and threw him in the fire. One of the witnesses blaming of him for his abuse, he fell upon him, who threw Mr. Langton in the fire; but Mr. Langton goes and fetched 4 more, so that they being but 2, thought it convenient to march off." (Lancashire Archives DDKE/acc. 7840 HMC/662).


More serious trouble lay ahead. On 27 July 1694, "Philip Langton, when gone to Wepre, in Flintshire, to the burial of his sister-in-law, was there taken up by Marisco, the messenger, alone, and the same day taken to Chester Castle, and there kept till Thursday the 30th of August, and then brought by Captain Baker and his Dutch Guards to London, upon Wednesday, 5th of September. And there, at one Beak's, a messenger’s house in Warwick Street, near Golden Square, in St. James's, was kept with Sir Rowland Stanley, Sir Thomas Clifton, and Mr. Legh, till Tuesday the 11th, and that day brought before the Duke of Shrewsbury; and the next day, September 12th, carried to Newgate, where he remained prisoner with Mr. Blundell, but in different rooms, till Wednesday the 10th of October, and there was then brought down to be tryed with the rest of the gentlemen, at Manchester.” (Lancs Record Office DDKE/acc. 7840 HMC/915).


This is a reference to the “Lancashire Plot”, a failed attempt to restore a Catholic monarchy. It involved, amongst others, Peter Legh of Lyme who had connections with the Marple Langtons. (Ralph Langton / Laughton of Disley was a tenant of the Leghs). The whole trial collapsed; indeed Peter Legh claimed he had never been a Catholic, but it remains illustrative of the Langtons’ involvement in Catholic affairs.


On 16 Feb 1696 George Langton of Hindley was buried at Wigan All Saints. He appears to have had no family, although a bastard son (no name) of a Mr George Langton was baptised in Wigan 20 Feb 1693.


The Lowe estate was now in the hands of Edward Langton, registering his lands as a papist in 1717. He and Catherine were to have no children, so attention must be focussed on Edward’s sister Elizabeth, who married a William Pugh Esq of Penrhyn Creuddyn at some unknown date, but probably in the 1680s.


The Pughs were a well-established Welsh Catholic family whose seat is today known as Penrhyn Old Hall. The Creuddyn peninsular is that piece of land that embraces Llandudno with its two headlands The Great and Little Ormes, Denganwy, Rhos-on-Sea and other small townships. Penrhyn Hall is situated close to the Little Orme at Penrhynside. (see the Penrhyn Old Hall website for the history of the Hall and the Pughs).


Elizabeth and William had six children – three boys, Philip, William and Joseph – and three girls, Winifred, Ann and Frances. Philip married and had as offspring Edward Philip Pugh who features later. Philip himself died relatively early compared with his siblings (before 1731). The other two boys appear not to have married. Winifred Pugh married Rowland Lloyd of Plas yn y Dref, Bala, dying there in 1755. Ann died a spinster before 1744 and Frances married a Francis Atkinson.


This is an interesting statement. Edward’s sister Elizabeth and her husband William Pugh had died before 1722. Also Robert Langton/Leighton in Marple had died in 1728, so, assuming he was Edward’s brother, Edward was the last of his siblings still alive at the time of his will, 1731. In this (above) he distinguishes between which of his nephews and nieces are “of Penrhyn” and which are “of Lowe”, which implies that at least some of the Pugh family are already living at Lowe at that time. Also of those at Lowe, William gets the estate, and his two sisters, Ann and Frances, receive a larger inheritance (£200 each) than their siblings.


Edward died 25 March 1733 and was buried at Wigan All Saints two days later. Catherine continued to live at Lowe until her death, and was buried in Wigan 26 January 1742. Her will reveals nothing of significance, merely distributing her personal effects amongst her Giffard nephews and nieces.


The Lowe was now in the hands of William Pugh until his death in 1754, being buried in Wigan on 29 December. Following his death it was taken on by his nephew Edward Philip Pugh, who is now referred to as of Coytmor. Coytmor was a property he inherited through his wife Mary Coytmor and was near Bethesda, near Bangor. About this time the Pughs left the old home of Penrhyn Hall for ever.


Edward Philip Pugh's tenure of the Lowe does not appear to have been a happy one. Like many landed families they appear to have bee “property rich – cash poor”. The archive material reveals many letters to creditors, apologising for the financial state of affairs he had inherited and begging their patience with his endeavours to settle the accounts. He did however, in 1757, acquire the use of two pews in Hindley Chapel on a lease of 999 years, an indication perhaps that he had abandoned Catholicism.


On 25 December 1765, Edward Philip Pugh sold the Lowe estate to the Duke of Bridgewater for £6500.00 – including the use of the two pews in Hindley Chapel. He died in 1769. His son James Coytmor Pugh was the last in the Pugh line.